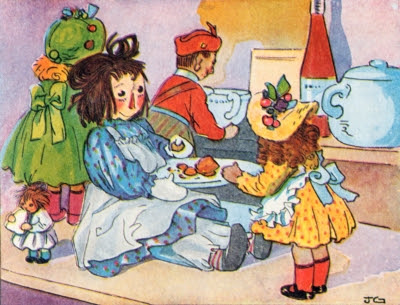 When I look at primitive doll faces I can't help but melt as they are so darn cute.  I was first introduced to primitive dolls with something I saw many years ago during a shopping trip to Sturbridge with my mother.  In one of the crafts stores we liked to visit I was looking at a box filled with patterns and just started laughing my head off. Of course, my mother asked, "what's so funny?" So, I showed her the pattern I was looking at and she burst out laughing, too. It was for a primitive cloth doll which was so ugly it was actually beautiful. So there we were - two grown women standing in the middle of a store laughing our heads off.

As I scanned through the box I found other patterns for primitive dolls that were just as ugly and just as beautiful. So, of course, I bought a few and could hardly wait to get them home so I could make them.   And, make them I did.

Around this same time primitive decor was all the rage and gaining in popularity online which created a ton of primitive websites, blogs, and groups. It seemed there were primitives everywhere and no shortage of freebies for creating all sorts of primitive dolls and crafts for home decor, but especially "raggedies."

So, given how much I love dolls, history and old books I decided to see if there were copies of some of the old dolls books out there and found a lot of different dolls books out there on Project Gutenberg, which displays books that are in the public domain.  Surprisingly there were two for "Raggedy Ann and Andy", which were as follows: 1) "Raggedy Ann Stories" written in 1918 e-book and 2)  "Raggedy Andy Stories"written in 1920 e-book. 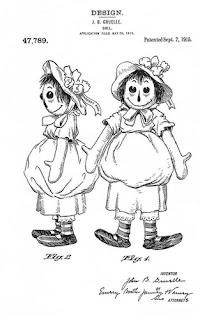 According to Wikipedia.org in 1915 Johnny Gruelle filed for a patent for a cloth Raggedy Ann doll, as shown in the illustration above - https://en.wikipedia.org/wiki/Raggedy_Ann.
As far as Raggedy Ann is concerned, one of the legends surrounding her creation is that a little girl was rummaging around her Grandmother's attic and finds a battered old doll with only one button eye. She brings the doll down to her grandmother who sews on a missing button eye.  While reminiscing about playing with Raggedy Ann as a young girl she decides to give it to her granddaughter and in doing so introduces her granddaughter to the world of Raggedy Ann.  And so Raggedy Ann was born.


As a child I loved the Raggedy Ann stories, which my Grandmother used to read to me.  As an adult, while I realize the stories are a product of their times,  I still found many of the Raggedy Ann's Stories doll illustrations by Johnny Gruelle themselves to be charming.   They depict "dollie" adventures.  What's not to love.... lol
There are twelve chapters in "Raggedy Ann's Stories" plus a preface and dedication and introduction.  I thought you'd might like to read the preface and dedication and introduction by Johnny Gruelle, so here it is:

Preface and Dedication
As I write this, I have before me on my desk, propped up against the telephone, an old rag doll. Dear old Raggedy Ann!

The same Raggedy Ann with which my mother played when a child.

There she sits, a trifle loppy and loose-jointed, looking me squarely in the face in a straightforward, honest manner, a twinkle where her shoe-button eyes reflect the electric light.

Evidently Raggedy has been to a "tea party" today, for her face is covered with chocolate.

She smiles happily and continuously.

True, she has been nibbled by mice, who have made nests out of the soft cotton with which she has been stuffed, but Raggedy smiled just as broadly when the mice nibbled at her, for her smile is painted on.

What adventures you must have had, Raggedy!

What joy and happiness you have brought into this world!

What lessons of kindness and fortitude you might teach could you but talk; you with your wisdom of fifty-nine years. No wonder Rag Dolls are the best beloved! You are so kindly, so patient, so lovable.

The more you become torn, tattered and loose-jointed, Rag Dolls, the more you are loved by children.

Who knows but that Fairyland is filled with old, lovable Rag Dolls—soft, loppy Rag Dolls who ride through all the wonders of Fairyland in the crook of dimpled arms, snuggling close to childish breasts within which beat hearts filled with eternal sunshine.

So, to the millions of children and grown-ups who have loved a Rag Doll, I dedicate these stories of Raggedy Ann.   - Johnny Gruelle

Introduction
Marcella liked to play up in the attic at Grandma's quaint old house, 'way out in the country, for there were so many old forgotten things to find up there.

One day when Marcella was up in the attic and had played with the old spinning wheel until she had grown tired of it, she curled up on an old horse-hair sofa to rest.

"I wonder what is in that barrel, 'way back in the corner?" she thought, as she jumped from the sofa and climbed over two dusty trunks to the barrel standing back under the eaves.

It was quite dark back there, so when Marcella had pulled a large bundle of things from the barrel she took them over to the dormer window where she could see better. There was a funny little bonnet with long white ribbons. Marcella put it on.

In an old leather bag she found a number of tin-types of queer looking men and women in old-fashioned clothes. And there was one picture of a very pretty little girl with long curls tied tightly back from her forehead and wearing a long dress and queer pantaloons which reached to her shoe-tops. And then out of the heap she pulled an old rag doll with only one shoe-button eye and a painted nose and a smiling mouth. Her dress was of soft material, blue with pretty little flowers and dots all over it.

Forgetting everything else in the happiness of her find, Marcella caught up the rag doll and ran downstairs to show it to Grandma.

"Well! Well! Where did you find it?" Grandma cried. "It's old Raggedy Ann!" she went on as she hugged the doll to her breast. "I had forgotten her. She has been in the attic for fifty years, I guess! Well! Well! Dear old Raggedy Ann! I will sew another button on her right away!" and Grandma went to the machine drawer and got her needle and thread.

Marcella watched the sewing while Grandma told how she had played with Raggedy Ann when she was a little girl.

"Now!" Grandma laughed, "Raggedy Ann, you have two fine shoe-button eyes and with them you can see the changes that have taken place in the world while you have been shut up so long in the attic! For, Raggedy Ann, you have a new playmate and mistress now, and I hope you both will have as much happiness together as you and I used to have!"

Then Grandma gave Raggedy Ann to Marcella, saying very seriously, "Marcella, let me introduce my very dear friend, Raggedy Ann. Raggedy, this is my grand-daughter, Marcella!" And Grandma gave the doll a twitch with her fingers in such a way that the rag doll nodded her head to Marcella.

"Oh, Grandma! Thank you ever and ever so much!" Marcella cried as she gave Grandma a hug and kiss. "Raggedy Ann and I will have just loads of fun."

And this is how Raggedy Ann joined the doll family at Marcella's house, where she began the adventures of Raggedy Ann, told in the following stories.

I think Johnny Gruelle would be so pleased to know that he has brought love, smiles and joy to the faces of millions of young girls for over a hundred years.

"Then," said the penny dolls, "we are indeed happy and proud for you! For wherever one of the new Raggedy Ann dolls goes there will go with it the love and happiness that you give to others.".... - From Raggedy Ann's New Sisters
I hope you find Johnny Gruelle's doll illustrations to be as charming as I did and hope you get a chance to take a look at the Raggedy Ann Stories free ebook. 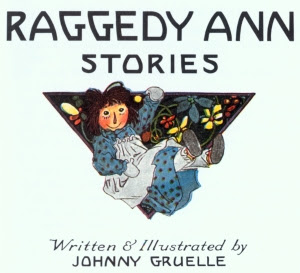 Raggedy Ann Stories Written & Illustrated by Johnny Gruelle - 68 Graphics
Per Project Gutenberg - This eBook is for the use of anyone anywhere in the United States and most other parts of the world at no cost and with almost no restrictions whatsoever. You may copy it, give it away or re-use it under the terms of the Project Gutenberg License included with this eBook or online at www.gutenberg.org. If you are not located in the United States, you'll have to check the laws of the country where you are located before using this ebook. 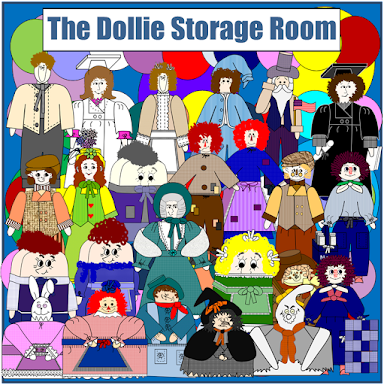