Meet the Dollies - It's Time For Primitive Annie's Story 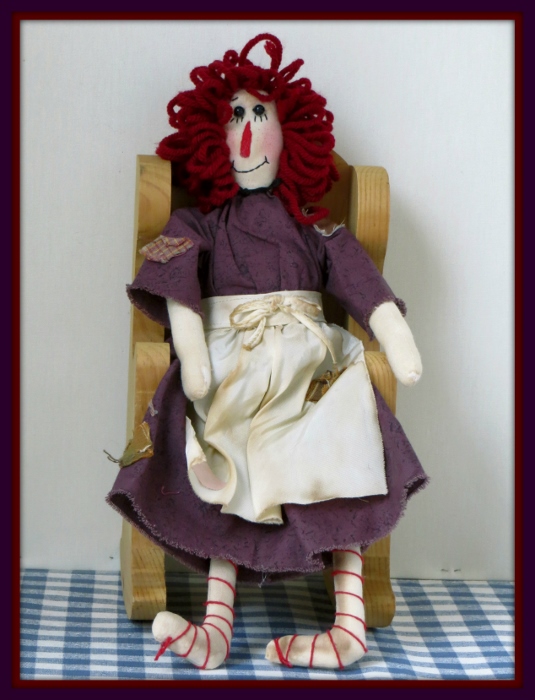 "Primitive "Annie" is on the shy side, just like "Primitive Andy" who is her prince charming. While he is the shyest "dollie" on the planet she is the sweetest "dollie" on the planet. And, both got embroiled in the "dollie stories" fiasco on "The Dollie Storage Room" blog and Linda's Blog. She, to, doesn't like any attention being brought to herself and knows she didn't write the notes back then. So, she was happy when Primitive Andy told her that I wasn't going to release the identify of the note writer back then.

It had been 10 years since her creation and, to date, she still has no story. Some of the "dollies" feel this isn't right. It doesn't bother "Primitive Annie." She's far too sweet to let anything like that bother her. She knows that I would tell her story in due course.

"Primitive Annie" was the 2nd primitive doll that Linda designed, but her first "raggedy Annie."

Well, "Primitive Annie" is such a person - or, such a "dollie!"  She is just the sweetest and nicest "dollie" you ever could meet. And, she's in love with her prince charming - "Primitive Andy.

Primitive Annie has a coffee stained cloth body, embroidered face with two-buttoned eyes, and oodles of freckles. She is wearing a coffee stained, tattered, and fringed dress with 3/4 length fringed sleeves. She is also wearing gathered bloomers and a tattered and fringed apron. She has a small tattered ribbon tied around her neck, patches on her clothes and raggedy red looped hair along the sides and top of her head. Floss is sewn to her feet and legs for her raggedy red stripes.

"Primitive Annie" may be wearing tattered clothes, but she is sweetness in life.  And, she has a dilemma. How can he know how wonderful she is if she can't even get to talk to him? How can Cinderella meet her Prince Charming when he's so shy?

Can you help her?

Meet The Dollies - It's Time For Primitive Andy's Story 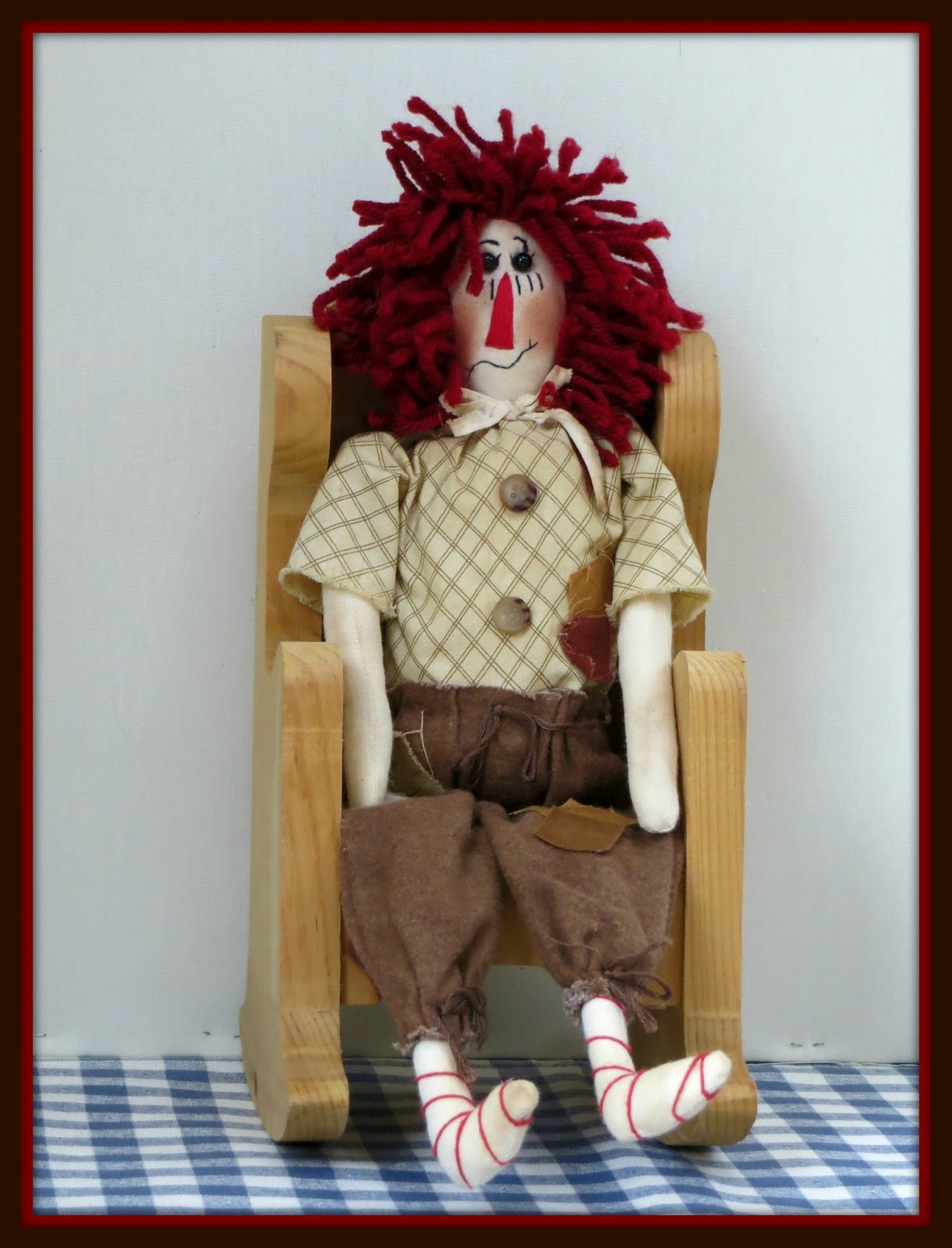 Well, maybe we should clarify that. He could very well be the shyest "dollie" in the world.

He just hates to draw attention to himself, hates to be the center of attention, hates talking before an audience, hates to have his picture taken, and hates having things written about him. The latter is why he has gone 10 years without a story.

Seven years ago a lot of attention was draw to 3 of the "raggedies" who had written notes to me demanding Linda tell their story. She posted about the latest "dollie stories" fiasco on "The Dollie Storage Room" blog and my Linda's Blog back in 2011.

Linda never disclosed who wrote the letters.  What all the "dollies" don't know is that Primitive Andy asked her not to write a story about him. He told her he was just too shy and would prefer not to have a story written about him. So, Linda took pity upon him back then and didn't write his story. However, he's not a kid anymore and has grown up a lot in the last three and is just so adorable she decided it was time to tell his story.

"Primitive Andy" has the distinct honor of being the first primitive doll that Linda designed and likes to pride himself on being small, lean, and, well, adorable. Just don't tell anyone he said that and just don't draw any attention to him. "Primitive Andy" is probably the shyest "dollie" in the world. And, he's just fine with that.

He just hates to draw attention to himself, hates to be the center of attention, hates talking before an audience, hates to have his picture taken, and hates having things written about him. It was tough enough for him to have his picture taken for his pattern. He was on edge for several days before and sick to his stomach. But, Linda assured him there would only be two people in the studio taking pictures. She would be there and "Primitive Andy" would be there. No one else.

"Primitive Andy" has a coffee stained cloth body, embroidered face with two-button eyes, and loads of freckles. He's wearing a coffee stained and fringed shirt with 3/4 length fringed sleeves, buttons and patches. His tattered and fringed pantaloons are gathered at the waist and middle of his calves and have patches. He has a small tattered ribbon tied around his neck, and raggedy red cut hair along the sides and top of his head. Floss is sewn to his feet and legs for his raggedy red stripes.

If you look closely at "Primitive Andy's" pictures you may see a little trepidation in his face. He could barely muster a smile when Linda said, cheese!" He knows there's only Linda and himself in the studio taking his picture, but he's just so shy. He really would prefer not to be photographed at all.

He's just unbelievably shy. Probably the shyest "dollie" in the world. But, he's just fine with that! Not everyone needs there 15 minutes of fame! Certainly not "Primitive Andy." 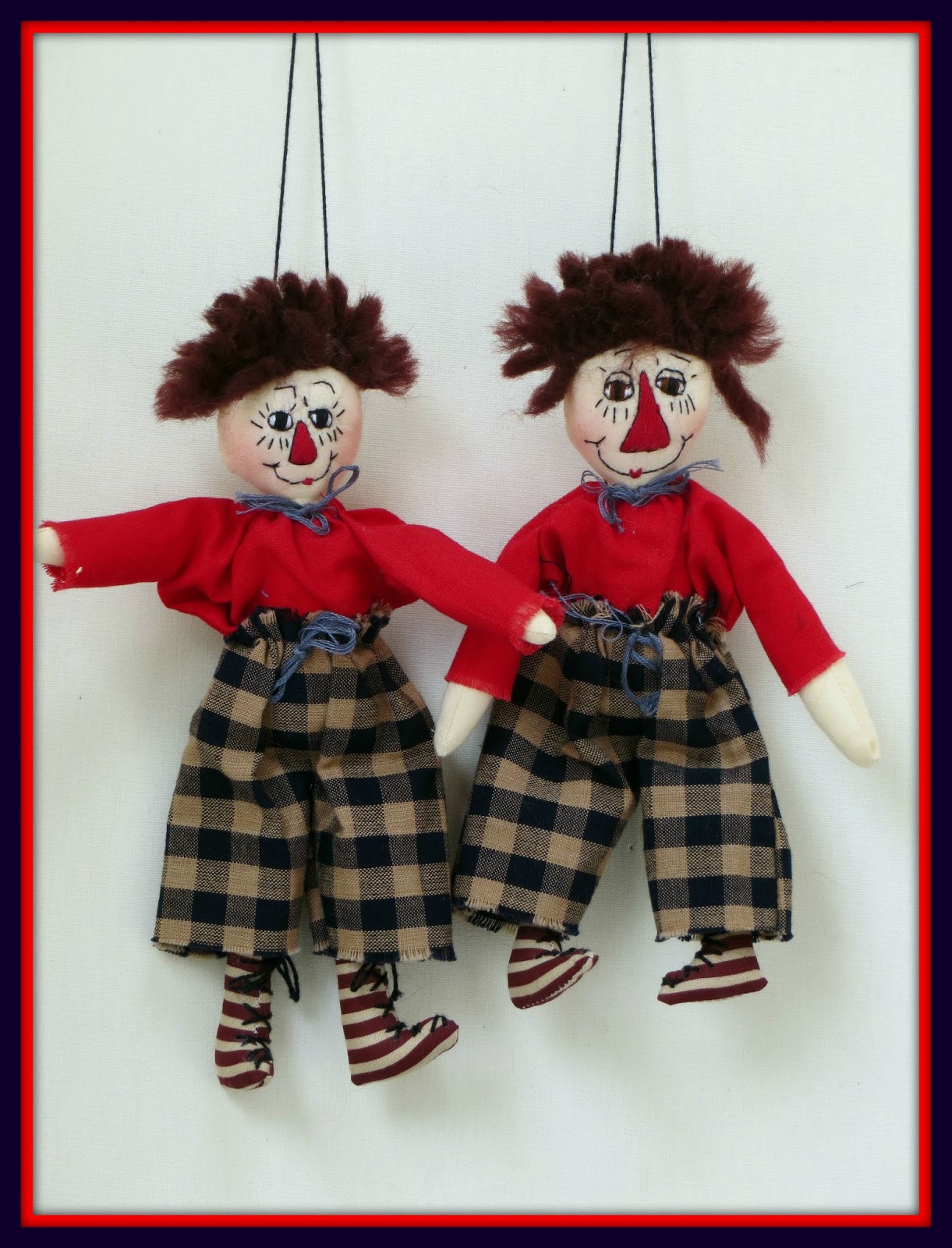 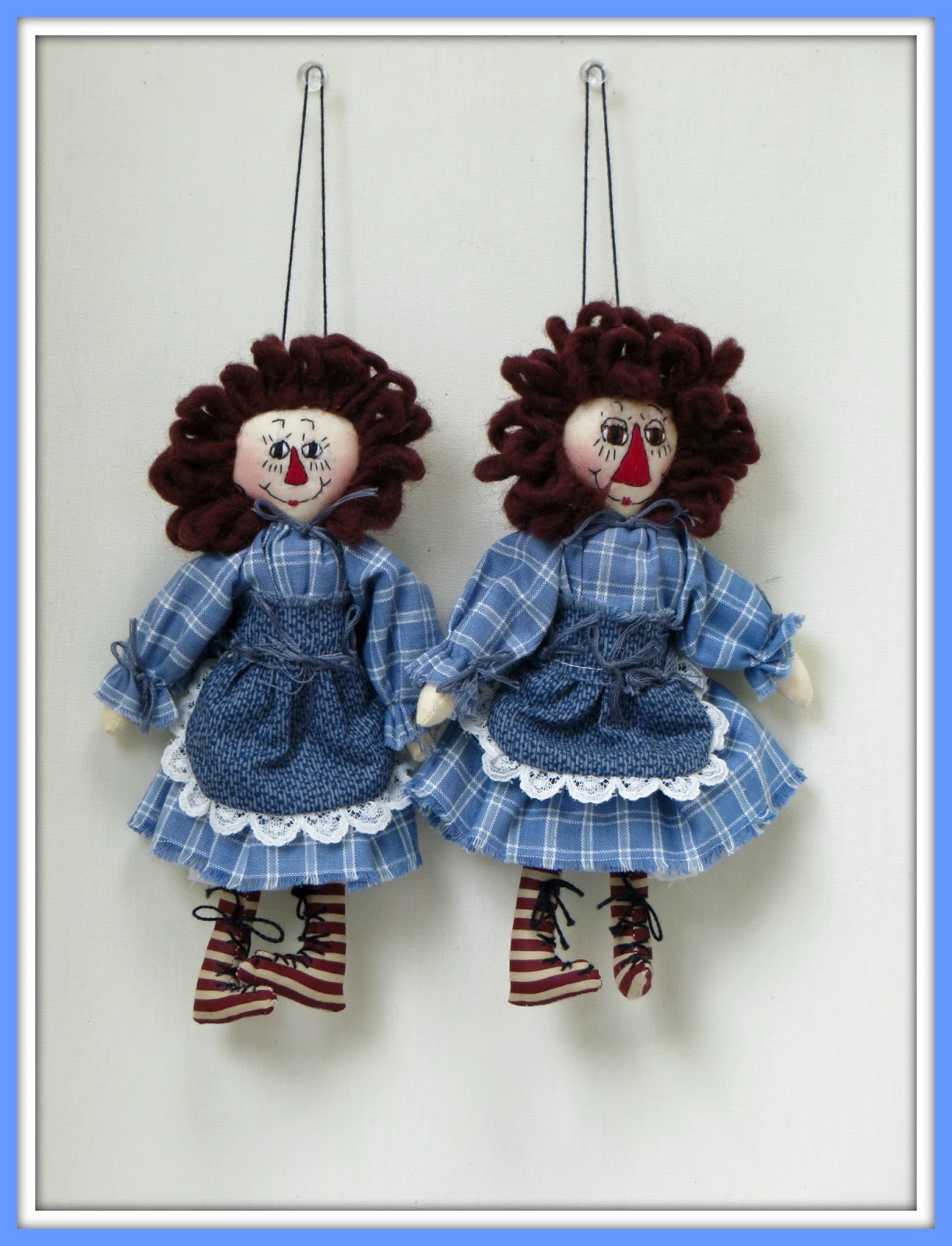 Siblings will be siblings and teasing among siblings has gone on since time began. While they might fight and tease each other they also adore each other and when it comes to families - well, blood is blood.

They can joust and wrestle all in good fun. Sometimes even accidentally hurting one another for which they secretly feel horrible. Kidding among family and fighting among family is just that - it's among family.

However, beware anyone who tries to hurt a member of their family. Then the gloves are off and you really see how much they will protect one another. How much they really do love and care for each other.

Big Brother Andy, Kid Brother Randy, Big Sister Annie, and Kid Sister Fannie are a loving, teasing, caring, fighting, wrestling, (and occasionally hair pulling) tight knit family. They are thick as "mud" and protective of each other to the core.