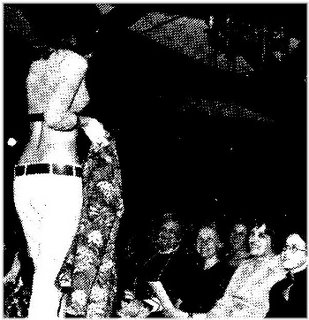 As a reader of my Linda's Blog and The Dollie Storage Room Blog you are probably well aware that my dollies have minds of their own. Maybe that's even an understatement. They have strong wills and strong points of view.

Plus, they have a distinct advantage over me in sheer numbers. There are literally thousands of them in the "Dollie Storage Room."

Yes, I know - my creative juices have gotten the better of me in the last few years. I, simply, have made way too many dolls. That's neither here nor there now. The fact is there are a lot of them. And, when they want something - well, THEY WANT IT! They're just so demanding.

The other day I heard rumbling and knew right away that it was coming from "The Dollie Storage Room."The "dollies" were up to something and making a lot of noise. I could only wonder what that was all about. So, what do they want now?

For sure, I knew it would just be a matter of time before they told me - or demanded something.

Well, it seems the "dollies" had gotten together and decided that 4 years was long enough to wait. They wanted to put on another "Dollie Fashion Show."  The last one was in 2006 and this was 2010!

This time they decided they wouldn't even ask me if that was "okay." My opinion, I guess, no longer matters. They wanted to do this, and so they will. Since ours is a democratic household, they out number me 1,000 to 1, there wasn't much I was going to be able to do. Even if my vote were to count double or triple or more, they'd still far out number me.

A little while later I got a message that "Doris Marie" wanted to see me. Whenever the dollies want to smooth things over with me they always sent "Doris Marie."

CLICK HERE TO CONTINUE READING»
Posted by Linda Walsh at 4:00:00 AM No comments: