Yeah! Dream on, Linda! You think the "Dollies" care that you're working. That’s highly unlikely.

"Well, they will when I get through with them", I said out loud. Of course there was no one there but me to hear that outburst. I know, I'm really brave when I'm talking to myself. It's another story when I'm surrounded by 1,496 dolls.

So, I got up to investigate. Of course, the sound was coming from "The Dollie Storage Room." I should have known. By the time I got over there the stomping was so intense that the floor was shaking. Good grief! The whole house was shaking.

"They're going to ruin the foundation", I exclaimed. "My husband won't like that one bit." He'll say, "We don't have the structural support to handle all that stomping." I had to put a stop to it right away. I didn't want to give my husband yet another reason to get rid of all the "dollies."

It became apparent to me the closer I got to "The Dollie Storage Room" that there was also "Irish" music playing. "Who's playing Irish music", I wondered? Then it hit me. There could only be one culprit. I had only made one of them - two would be more than I could handle. It had to be him.

It had to be "I’m So Lucky Johnny Boy!" - The leprechaun I had made based upon a Sparkles N Spirit Design.

He is a 21” cloth and wood leprechaun with lined boots, leggings, leprechaun outfit, gloves, lined hat, pipe, and shamrock decorations. And, there is only one of him because I couldn't handle more than one leprechaun in my household.

It's bad enough that my husband's grandparents came over on the boat from Ireland and he has a twinkle in his eye and can be every bit as mischievous as a leprechaun. I didn't need a bunch of leprechaun dolls, too. So, I only made one.

Well, given all the racket it was obvious that even one leprechaun in a household could be one too many.

I knew when I finished him that "I'm So Lucky Johnny Boy" could be a charmer. He was every bit as devilish in nature as any leprechaun could be? The twinkle in his eyes could charm the socks off of you? All he had to do was look at you with his rosy cheeks and that twinkle in his eye and you were his volunteering to be his "slave" forever.

He was cunning! He was mischievous! He was resourceful! He could lure "dollies' from far and wide with his promise of "a pot of gold." And, the "Dollies" all loved him. I had to admit that despite all that he was a right fine cobbler by trade. And, if there's one thing I like besides dolls, floral arrangements, and genealogy - its shoes! 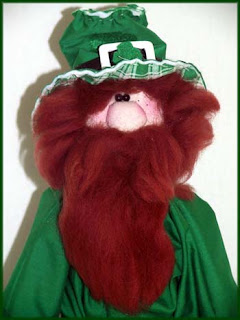 So, what had "I'm So Lucky Johnny Boy" done to get the "dollies" all riled up?

I had my hand on the knob to the door of "The Dollie Storage Room" when I heard a loud burst of clapping. "Clapping?" "Who was clapping and what were they clapping for?"

I wasn't prepared for what I saw as I slowly opened the door to "The Dollie Storage Room". "I'm So Lucky Johnny Boy" was sitting on the sidelines clapping at something that was going on in the center of a large circle of dolls. They were all having a "foot-stomping" time with whoever was in the middle of the circle.

I knew I had only made one leprechaun and he was on the sidelines. "Who was causing the dollies to get all riled up if not my leprechaun?" So, I approached the circle and the dollies parted like the parting of the red sea. I couldn't believe my eyes.

In the middle of the circle of "Dollies" was my dear husband dancing a jig. An Irish jig. "What are you doing", I asked him? "Are you out of your mind?"

As he turned to face me he gave me one of his devilish grins. The twinkle in his green eyes was every bit as beguiling as "I'm So Lucky Johnny Boy."

"What are you doing, darling", I asked, again?

"Why are you doing an Irish jig", I responded?

"For the pot of gold, of course", he responded.

He'd once again fooled us and then disappeared. I wasn't worried - I knew he'd be back. After all, who can resist 1,496 other "dollies" who just love you and love you and love you some more. Even the most mischievous leprechaun can’t. Why even his pot of gold can't buy love like that.

I closer the door and went back to work.